The National Broadcasting Services of Thailand, known as NBT or Channel 11, has a broad remit, with the network being responsible for a full gamut of production, ranging from entertainment and government public relations to delivering a news service to the Southeast Asian nation. Chief of Studio 2, Mr. Chatree Seangsuk, has the unenviable task of ensuring the broadcast delivery systems and equipment function as effectively as possible. Of course, this requires ongoing system upgrades to keep pace with rapid technological changes.

Having initially deployed Avid iNews broadcast solutions in 2010, the station had many years of experience to prove the reliability of the system. “Avid iNews supports our news production workflow including script-writing, scheduling of programs and on-air broadcast,” explains Mr. Seangsuk.

The Maestro | Virtual Set is used in both news and program production for both recording and live broadcasting, allowing us to replicate real-world scenes within the studio.

Local journalist, Teerapong Siwawannawon has worked with the Avid newsroom solution since its original deployment and was quick to advocate the product advancements over time. “Following the upgrade to MediaCentral | UX, we can search content faster than ever. News reports are broadcast from 5:00 am - 1:00 am and it is essential to deliver the news fast. With the Avid equipment the reporter can easily search the news item, write the script and access the content via the network for immediate editing before conveniently delivering the material to the Editorial Department for checking prior to broadcast,” explains Mr. Siwawannawon.

With the need to improve upon the station’s deliverables, Mr. Seangsuk underwent extensive research before expanding the kit to include an Avid Maestro | Virtual Set studio system. A detailed review of technical specifications, as part of a tender bid process, accompanied by tours of other TV stations’ installations and trade show demonstrations at NAB, IBC, and BroadcastAsia led him to a tightly integrated workflow encompassing Avid iNEWS, Avid FastServe | Playout, Avid NEXIS storage and Maestro | Virtual Set with the new Xync 2.0 camera tracking system. 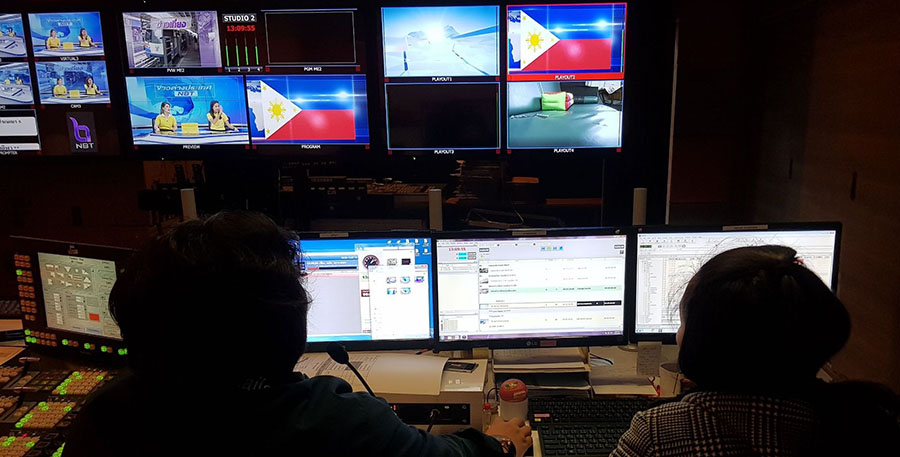 “The Maestro | Virtual Set is used in both news and program production for both recording and live broadcasting, allowing us to replicate real-world scenes within the studio,” states Mr. Seangsuk. “We work with four cameras; three cameras are installed on tripods with the fourth mounted on a robotic camera control system. The four cameras work in harmony with the virtual studio system using chroma key that can be switched from actual exteriors and back to the studio. This is enhanced through the use of graphics to add visual impact.”

“Pro Tools allows us to easily work on sound improvements, narration, and sound mixing including sound effects via the broad range of available plug-ins,” enthuses newscaster, Ms. Krongkaew Chaiyakit. “When used in conjunction with the Artist Mix, Pro Tools can be controlled quickly and easily, and the files can be delivered through Interplay | Production for immediate use with images edited in Media Composer.”

News editor, Mr. Kritikorn Jitsondhi elaborates, “We’ve been using Media Composer for editing news and delivering breaking news since 2010 and one of the outstanding features is its power to quickly edit across a variety of file types. The different file formats can be edited on the same timeline simply and accurately. Many tools are available and when they are used to edit pictures, together with the Interplay | Production and the Avid NEXIS systems, the edited pictures can be searched more conveniently. We have made sure our Media Composer software is kept up-to-date and the quality of the software just gets better and better with each version.”

Improved efficiency and functionality within the studio environment

“We will often switch from an actual real scene, to a graphic-generated scene or sometimes we will use a graphic-generated scene jointly with a set,” continues Mr. Kritikorn Jitsondhi. “The new virtual studio system makes this far more cost-effective and recording within the studio can be continuous. Changing programs from one program to another takes much less time. We can now record several programs per day with significant cost-savings drawn from not having to build actual sets and we have also been able to achieve much more diversified program formats due to the flexibility.

In 2015, the station underwent the first installation of Studio 2 with two cameras. This was soon followed by an upgrade in 2017 with Studio 3 installed that same year. Mr. Seangsuk required that the system integrator (SI) meet his custom technical specifications in tandem with his limited budget. The complete integration of the Avid workflow delivered on both these requirements and has proven to bring ongoing workflow efficiencies and savings.

© 2020 Avid Technology, Inc. All rights reserved. Avid, the Avid logo, Avid Everywhere, iNEWS, Interplay, ISIS, AirSpeed, MediaCentral, Media Composer, Avid NEXIS, Pro Tools, and Sibelius are trademarks or registered trademarks of Avid Technology, Inc. or its subsidiaries in the United States and/or other countries. The Interplay name is used with the permission of the Interplay Entertainment Corp. which bears no responsibility for Avid products. All other trademarks are the property of their respective owners. Product features, specifications, system requirements and availability are subject to change without notice.